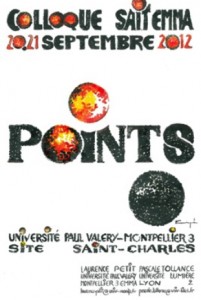 In association with EMMA (Montpellier 3 Center for English Studies), the 2012 international SAIT conference will focus on the point / dot / period… to pursue its ongoing exploration of the relationship between text and image. The punctuation mark on the written page and the mark on the image (whether it be painting, drawing or photography) will be approached as two forms of silent expression that can shed light on each other despite, or thanks to, their singularity. Rather than restricting the field of definition, we suggest that connections be drawn and signifiers allowed to play – in the spirit of what Roland Barthes does with the punctum in Camera Lucida where punctuation “proper” finds itself associated with various other meanings derived from the Latin word: “punctum is also: sting, speck, cut, little hole – and also a cast of a dice. A photograph’s punctum is that accident that pricks me (but also bruises me, is poignant to me)”.

As an instrument of syntactic articulation and accentuation, the punctum mainly points to a crucial difference between text and image: the opposition between a space which is cut out into meaningful units forming a linear arrangement and a space free of such segmentation and sequential organisation. One may object that images sometimes divide and multiply, make up series or possess a narrative configuration. One also has to take into account the case of the moving image which can be broken down into shots and sequences. But more importantly, perhaps, this punctuation, which allows multiple articulations, leaves open the question of what really works as a stop / full stop in the process of reading or watching. “How do you decide to stop looking at something?”: couldn’t this question, voiced by one of A.S. Byatt’s characters, be relevant to the reader as well as to the viewer (in analogous and, for that reason different, terms), even when a definite order and direction informs the reading or the viewing? Doesn’t the pleasure of reading also lie in what blurs the configuration or scansion of the text, in what prevents the closure of meaning, in the very absence of a nodal or anchoring point that can put a stop to the slipping of the signifier? Isn’t it true that narratives which leave us with the question “Qu’est-ce qui s’est passé? / What has happened?” have a special grip on us?

Whether one concerns oneself with the text, the image or their mutual attraction, one might care to pay attention to a paradox emphasized by the geometrical definition of the point. A portion of space precisely determined by coordinates, the point is, at the same time, a portion of space whose dimensions are null. In that perspective, one may also find that what serves as a support to the eye of the viewer or of the reader (the salient, culminating, critical point) can simultaneously turn out to be a vanishing point or a blind spot. Barthes’s punch or puncture which marks a point of intensity, the piercing of affect, is also the elusive point where all meaning dissolves. In front of what both juts out and vanishes, one may remember that in French “point” is a mark of negation, synonymous with “pas” (not). Whilst considering the various extensions that can be given to the notion, it is also worth sticking to the point as material, physical, mark. As such, it does not stop slipping through the net. The question of the visibility of the point, and of the desire to enhance it, can be raised. In the case of the image, one can reflect on the role given to the point by pointillism or by abstraction – not to be confused with a mathematical abstraction (to take but one example, Kandinsly’s point possesses extension, form and colour). As far as the text is concerned, one may consider that the point (or full stop or period) is both indispensable and meant to pass unnoticed. Yet, the point does occasionally draw attention to itself through excess (parataxis), or lack (logorrhea), untimely and abrupt intrusion (aposiopesis), or expansion and multiplication (suspension points). One can pay attention to the special language of the point, to its contribution to expressivity through its various modulations (colon, semi-colon, question mark, exclamation mark). If a special meaning may be attached to this silent language, what resonates most is sometimes nothing but its muteness, the resistance of affect to meaning.

The point both separates and links. One may think of it as a break or a stitch. Its emphasis invites us to look into aesthetics or poetics centered on the fragment, on fracture and disruption – on a lack or excess which may signal anxiety or jouissance. The point may also be envisaged in terms of equilibrium. Details or “points of detail” sometimes seem to take on an unexpected and disproportionate importance: the shard may turn out to be bigger than the whole, thus threatening the entire balance of the text. Next to Barthes’s punctum, one may think in that respect of Georges Didi-Huberman’s “pan”, inspired by Veermeer’s View of Delft, that “little patch of yellow wall” first pointed out by Proust. The question of the extension, effect, or resonance of the point also invites us to consider it together with the line (“A line is a dot that went… for a walk”), the void, and the blank.